This is THE guide for running Guitar Hero on PC – the most up to date fixes and tweaks as of 2017. Guitar Hero 3 PC will run on most systems but the benefits of performing these tweaks are massive. When you first load the game, it will run at 60 frames per second and play animated videos in the background which slow down the performance.

Here is a list of tweaks you can use to optimize the game: 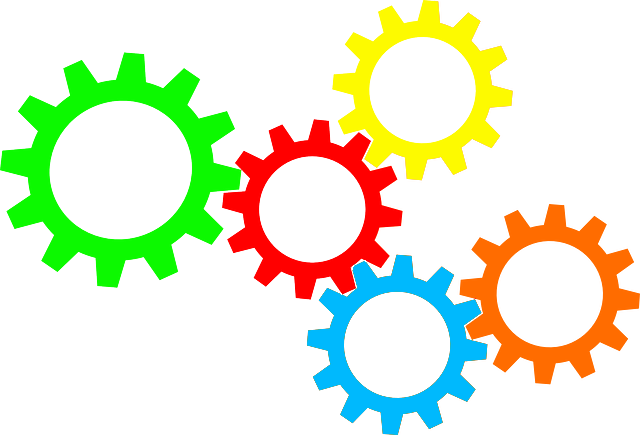 VSYNC stands for Vertical Synchronization. VSYNC attempts to synchronize the games frames per second (FPS) with your monitor’s refresh rate and it’s purpose is to eliminate something called “tearing”. VSYNC is the main cause of video lag in Guitar Hero for the PC. VSYNC locks the framerate at 60fps, or your monitors refresh rate. When it is disabled you can get much higher frames per second. Importantly, removing this frame rate “cap” will reduce the latency caused by the game constantly trying to keep everything running at a constant framerate (usually 60FPS). Disabling VSYNC and removing the background graphics is recommended on all hardware configurations to reduce input latency on Guitar Hero for PC.

To see which Graphics Card (GPU) your computer is running, click start and type in DXDIAG. Using DXDIAG click the display tab, and the name of your graphics card is shown in the first section. After, you can use google to find more information on your graphics card. If you have an Nvidia or AMD graphics card then you can use the steps listed below to disable VSYNC. If you have another type of graphics card, for instance an integrated GPU (iGPU) you will likely be able to use google to find alternative ways to disable VSYNC.

When you next load Guitar Hero, VSYNC will be off, which removes the frame rate limit. 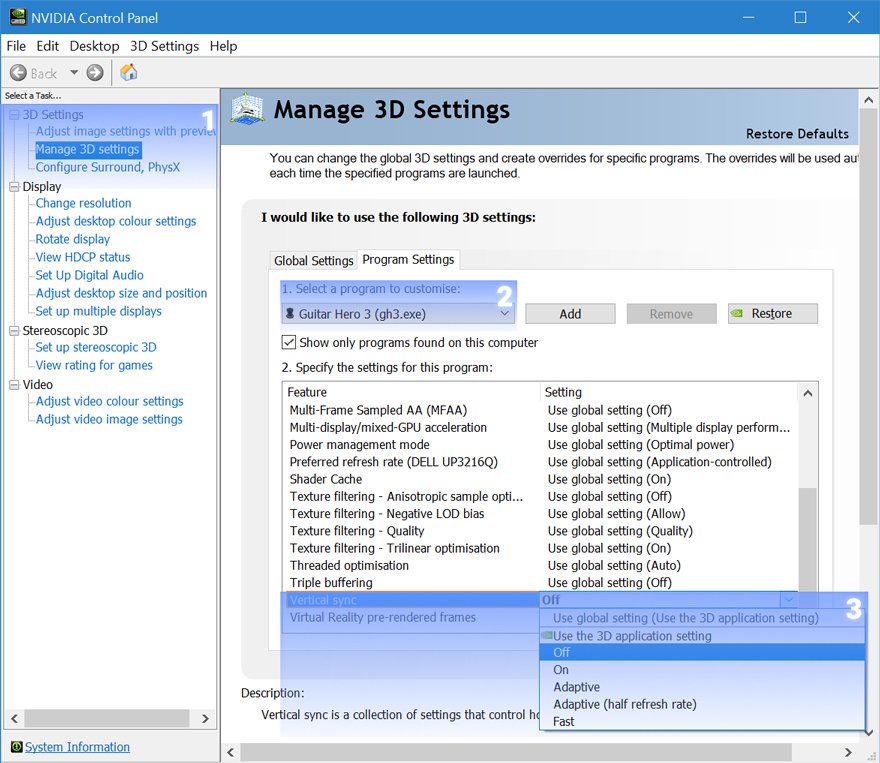 If you are using an AMD graphics card you can disable VSYNC via the AMD Catalyst Control Center. In catalyst control center, go to preferences > advanced view. This lets you access Gaming > 3D application settings. There, scroll to “wait for vertical refresh” and turn it off. You can turn it off for all applications, or only in Guitar Hero by selecting “add”. An alternative (for AMD and Nvidia users) is to launch guitar hero 3 through “3D analyse”. Download it here from this site. Please refer to this thread on scorehero for a guide on running GH3 through 3D analyse. 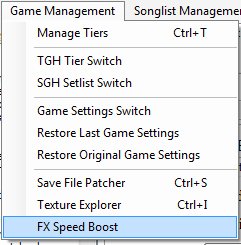 The 3D background scene can be disabled to improve performance on all setups. It is also worth removing as it can be a distraction to expert players, who want to focus on reading the chart. To disable the background graphics for a fully black background scene you can use GHTCP. When you use GHTCP, you will have access to a new “custom menu” in the game where you can disable background graphics and animations, per the image shown. You can disable every setting on this menu to optimize performance without any adverse effects. Select the “disable GFX” option to quickly disable all. 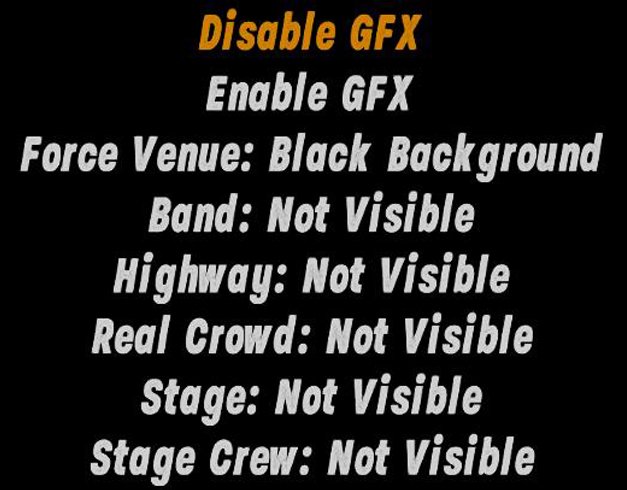 Many of the default fretboards are distracting and make it difficult to read the notes. It is worth changing to a black fretboard to improve chart visibility and reduce distractions. It is possible to do this from within GHTCP, via the texture editor. Follow the guide on this website to learn how to easily change fretboards within the game. You can download the metallic black fretboard shown by right clicking the image and selecting “save image as”. 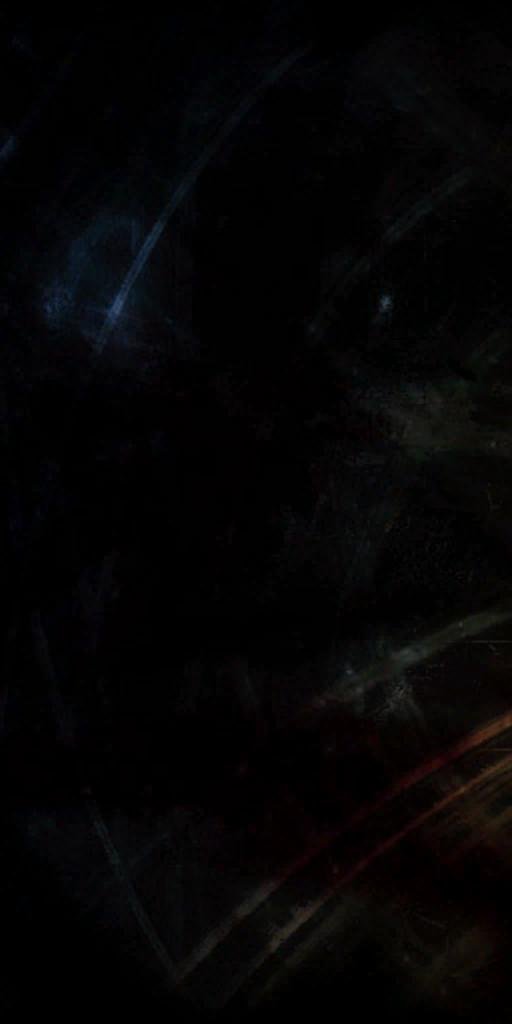 The ultimate goal of calibration is to have the timing for when you need to fret or strum a note perfectly lined up with when it passes the strike-line in the game and when you hear that note in the song. In the examples below, I have used a red background to demonstrate the “timing window”, (as in, when you are supposed to fret or strum a note) and what it might look like on a perfectly calibrated setup, compared to a poorly calibrated setup. In a perfect setup, you would expect an even amount of leniency either side of the note. In the “bad” example given; you can see there is barely any window for strumming before the note, playing the note early. As a consequence, there is a huge window for strumming after the note, or playing the note late.

Within the settings, you can adjust the video and audio latency so that the notes and sounds are in sync with when you play. Do not use the built in “calibrate” option. This works on the console versions, but not on the PC when you have VSYNC disabled.

The video latency setting should be 0ms; adjusted to compensate for your monitors response time – some screens may have up to a 0.1 second “delay” between you pushing buttons and the result being shown on your screen. One tenth of a second doesn’t seem like much time, but in this game it is going to be important to get it right if you are playing at a high level.

The audio latency setting will be anywhere from 0-200ms depending on your setup. I use a setting of 200ms for audio and 0ms for video.

If you can, try to find out the model and manufacturer of your computer monitor. Search on google along with a term like “input lag” or “latency” or “response time”. You can find information about the monitors input latency and response time and then adjust those values in the game to compensate. I would also recommend considering a faster 120Hz+ gaming monitor for serious players. This type of gaming monitor is optimized for fast moving images; reducing the ghosting or blurring on screen and they also offer excellent response times of less than 1ms (one thousandth of a second) before the screen “updates”. Lastly, with any monitor go into it’s on-screen settings menu to see if it has features like “game mode”, or options for refresh rate.

Learning to Compensate for Lag

No Guitar Hero setup is perfectly free from any latency but it is possible to reduce it to the point where it is a non-factor. The key to good calibration in Guitar Hero 3 is to ensure that the timing window for when you need to fret a note is not affected by the framerate limit. In other words, make sure VSYNC is disabled! Once VSYNC is disabled; it is possible to learn to play just as well with some video or audio latency present. If you have a slight delay in your monitor, or in the music, you will learn to compensate for that in your head as you play – you might end up fretting everything slightly late or early. As long as you develop a good feeling to compensate for the timing you can significantly reduce any negative impact of a monitor with a slower-response time.

Guitar Hero is not a demanding game and with the tweaks on this page it will run on almost any computer. That said, it is still important to aim for the highest framerate possible to reduce the video latency. On systems with older or integrated Graphics cards, it might be necessary to reduce the resolution all the way down to 800×600. For most computers, a resolution of 1280×720 or 1920×1080 will help to optimize performance. It is of no visual benefit to run the game at a higher resolution if you are using a black background as the notes highway and other elements are optimized for up to 1920×1080. If you are using a black background then all other graphic settings can be set to low; these settings will not affect the image quality of the notes and other elements. Running the game with the background graphics enabled can significantly affect the gameplay experience on lower-end computers by introducing video latency.

Guitar Hero 3 was released in 2007 and as such the user interface does not play nicely with resolutions beyond 1920×1080. You may run into some scaling problems. Sustain notes will render thinner than normal and some menus, such as the section select in song practice can display off-screen.

My personal preference is to set the audio FX option to 1/11 and leave the other values at max. This makes crowd noise and general menu navigation sounds much quieter. For most Custom Songs, the crowd noises are not synchronised like they are with on-disc content so there really isn’t much added immersion from having them wailing in the background.

Auto sign-in – is best set to “off” to remove any prompts. Online content is no longer supported

Hyperspeed is a track scroll speed option, ranging from level 1 (slowest) to level 5 (fastest). Most advanced players find it easier to play with hyperspeed than without because it allows them to read and react to complicated patterns better.

Was this helpful? Tell people about it.