LAZERS AND TRILLBOT. The Big Boys.

Introducing Lazers ft Dr Zoidberg and Trillbot. Lazers, the latest Dr Zoidberg song was sure to draw a crowd and I followed it up with my personal best song ever ‘Trillbot’.

Lazers hard chart but it’s shortness may make it an easier FC than Nubinator, Trillbot, Quadpocalypse and Chordzilla. The Lazer sounds are typically speeding up at their own rate and off beat, so charting them accurately was a painstaking process – trying to hit them will be too! The whole chart is extremely satisfying to play when you manage to keep up. The UBER chart should not be considered an ‘official’ part of the track pack. Most players won’t even be able to touch this but for the few who can, it’ll be entertaining seeing what happens. Enjoy the preview video!

Trillbot this song is the best thing I’ve made. In my opinion. Better than Victory Solo X, Uber Juice and Black Hole. New champ. I’d be interested to know what you think! I created Trillbot in September 2020 after finishing most of Quadpocalypse and got good vibes. Everything worked perfectly. And the relentless Trills at the end makes me think of watching ‘solo B’ in Jordan for the first time. This is something I’m genuinely happy with and want to play (and listen to) as much as songs like Jordan and Xepher which inspired me to make music in the first place. 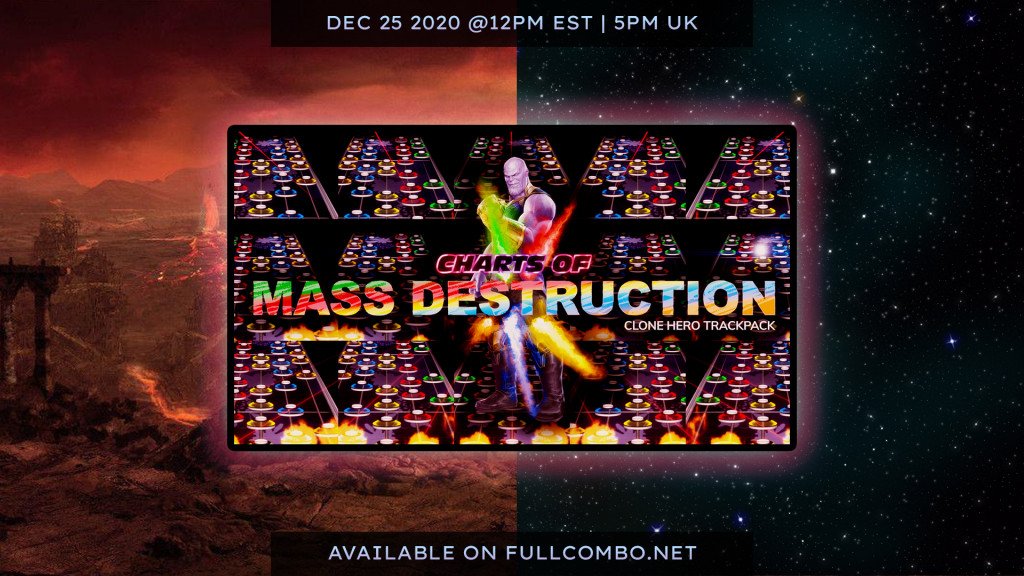 Charts of Mass Destruction will be available to download on fullcombo.net on Christmas Day. Dec 25th 2020. 12pm EST / 5pm UK.

These three guys sporting a GH/CH themed Christmas Jumper are hidden within 3 single frames across the track pack videos. Actively trying to spot them is futile. There are roughly 220000 frames across all videos. More chance of getting a 100% FC on every song.

In addition, you may have noticed there is a hidden infinity stone within each song. My song ‘Transformer v1.0’, forms part of a new community challenge and ties into these. More to come on that when it is released. It is a VERY basic song and chart, think Sequence series. But it won’t remain that way.

CHORDZILLA a monster 12 minute long 5000+ notes chart will come tomorrow. The other three too, depending on how quickly I work (Two bonus songs; No More Memory, Rock it. New community challenge song; Transformer v1.0).